Planning for the future
For many years now L.F.C. has been going from strength to strength and consequently the management have for some time been looking at possible solutions for expanding the club premises and the range of facilities on offer.

As luck would have it the Morris Garage in front of the club and facing onto Leabridge Road had become vacant and after protracted negotiations with the owners, Leyton F.C. were able to purchase these premises.

Architects Clark Smith Partnership were then approached to come up with suitable plans to translate our vision into reality. See pictures on left.

Demolition
First things first, we had to demolish the whole structure in it’s entirety as our plans involved starting from scratch on a bare site. It took several weeks and countless skips and lorries to dispose of all this but eventually we were in a position to start laying the hard-core and driving in the 82 piles for the new building.

Cos Confident of Promotion

With the end of the season fast approaching, Leyton Chairman/Manager Costas Sophocleous is confident that his club can see out the remaining matches and win promotion. 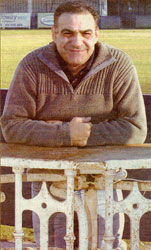 Speaking after a disappointing draw with Ware he said: “The draw on Saturday put us out of contention for first place and I think Cheshunt have got the title wrapped up.”

“But as long as we win our home games and draw our away games, then I’m quietly confident that we should easily take second place.”

“We have got Abingdon Town to play on the last day of the season, but hopefully we will have secured promotion by then.”

But with Cheshunt currently sitting on top of the table with a commanding lead, the close proximity of the two clubs will mean that both will be promoted to Ryman Division 1 North, instead of one I the North and one in the South.

But this is a problem with which Sophocleaous is not quibbling: “We will both be going into the Northern League as we are both north of the river which is what they use as a rough cut off point.”

But for now, Sophocleous must concentrate on getting there first: “It will be a tough run in. There are nine game left, but I would rather be in our position than anyone else’s – bar Cheshunts of course”.